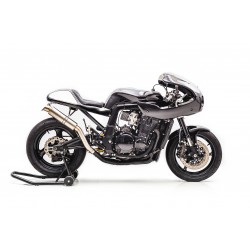 Originally posted on Return of The Cafe Racers - HERE

I really wanted my wife to have a motorcycle to ride instead of always sharing whatever bike was ready at the time. Her birthday was coming up so I began searching for a birthday surprise project to build over the winter. Typically I don’t search for a specific bike, rather just a price point I can work with and I happened across this bike, a 1993 Suzuki GSXR1100. The first of the water cooled GSXRs. I've always been a huge fan of these superbikes as I was in college when they were new and couldn't afford one.

Off I went to fetch the bike. The 3-hour drive took me north and by the time I got there the snow drifts were well above the roof of my truck. I was questioning my sanity the entire trip. When I got there the GSXR was in a shed covered in snow so I wasn't going to spend a lot of time going over it. The owner swore it ran in the spring but towards the end of the season it had died on him. I took his word for it, beat him up on the price and we loaded it up. At least the extra weight in the truck made the drive back a little easier.

Before I spent any time figuring out what I wanted the bike to become I needed to see if I could get it running. I drained the oil immediately as I have seen far too many neglected bikes with coolant, water or gas mixed in with the oil and to my surprise, it was pretty good. Next up I pulled the plugs to have a look and they were all new iridium units - nice! I hooked up a new battery with plug number 1 resting on the cylinder head and cranked it over. Lots of spark! Finally, it was time to pull the carbs and check for fuel. This is where I found the bikes issue. It had sat for far longer than he had stated and the carbs were completely gummed up. So after a thorough clean I had them back on the bike. After feeding it a bit of quick start and 2 or 3 cranks later we had lift off. Poor maintenance makes for a good bargaining chip!

I never particularly disliked this bike in its stock form. After all, I did lust after them in my early years. But I have a thing for muscle bikes that are all about the engine and less about the plastic that covers it. My wife also digs naked bikes so it was an easy decision to ditch the factory bodywork. I had this concept in my head for a few years after seeing a few Paul Smart bikes at local events and bike shows. I imagined that if the tail had the right width it would work well with the stock GSXR tank. So, I ordered one off eBay to see if I could make it work. When the tail arrived it was clear it wasn't going to work with the bikes stock sub-frame, but the width was precisely what I was after. I moulded part of the stock side panels of the GSXR using fibreglass and grafted them to the front of the Ducati tail to lengthen it and help it blend with the tank to look more like a factory Suzuki part. I then created a new sub-frame to support the tail that matched the stock seat height, supported the back of the tank and had enough room for me to store an anti-gravity 12 cell battery under the hump.

The stock shock was very grungy. It was leaking and had an ugly purple spring on it with a remote reservoir that mounted to the stock sub-frame. I replaced it with a late model GSXR1000 shock that matched the same eye-to-eye length and had a piggyback reservoir that worked better with my new sub-frame design.

When it came to the paint colour it was an easy choice as I've always wanted to do a completely black bike playing with different finishes from matte, satin and gloss. I had a cafe-faired GSXR mocked up in photoshop for a while, but didn't have a fairing that would suit. Knowing where I was headed with the build I painted the bodywork, the tail, tank and headlight bucket for version 1 of the build. This is how the bike looked during the first season my wife rode the bike. As for the graphics I wanted to keep some of the GSXR racing heritage so I laid the number panels in white along with the tank logos and added braided white covered Core-Moto brake lines to match.

After my wife first season of riding the GSXR, I tore it completely down to tackle version 2. The bike now wears a 2008 GSXR600 front end with Galfer brakes, radial callipers and master. Clip-ons are woodcraft with a 1" rise to them and the frame has been finished in satin black. The engine is matte black with gloss black covers and all stainless bolts and the wheels are a gloss powder coat thanks to Flashfire Coatings. The rear sets are stock with Woodcraft pegs and I went through the carbs completely again, adding a factory jet kit to cope with the new K&N filters and the open exhaust. The rear rotor is a waved unit from eBay and the tires are Dunlop Q3 in a 180/120 set up.

I ordered a Paul Smart fairing for the bike from AirTech in California crossing my fingers it would look the same as my mock-up, but it didn't quite work out as planned. After multiple trim jobs and test fits, I finally managed to get it to line up with the lines of the tanks. I fabricated the nose mounts from tube steel and tig welded it all together to support a new digital gauge and the headlight. The upper mount was machined to slide into the steering stem and it all attaches the fairing using Dzus fasteners. The new headlight was from a Honda CB400. It was far too small to mount in the centre and I loved the look of the older endurance bikes so I offset it to mimic that style. Once I cut the hole I had a good friend who's way better at fibreglass than me French in the hole to match the light. The Zero Gravity screen is finished in smoke to match the sinister paint scheme.

The bike wore an unknown set of headers with a Kerker canister. I wanted an exhaust that closely followed the new tail design but couldn't find anything online. I did find that DanMoto made a high mount slip-on for newer GSXR750s so I took a chance and placed an order. Once it arrived I fabricated the mids to link up to the stainless elbow and canister, welded an exhaust mount to the sub-frame and sent it off to Flashfire Coatings for powder work. My wife then surprised me with a trip to see my brother in California so I took the seat-pan along with me and had a new seat pad made by Tuffside to surprise her when I returned.

The GSXR1100 engine is insanely smooth. The stock gauges go all the way up to 300+kmh, but now with some considerable weight loss (at least 90+lbs) and modern suspension it’s insanely fast and has the handling to match!