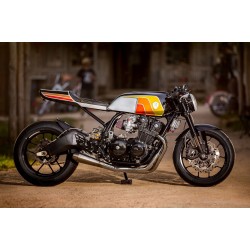 The Chappell brothers are no strangers to these pages. Over the years, they’ve produced an impressive string of bikes—despite living hundreds of miles apart.That distance has proved hard to manage, so these equally talented builders each handle their own projects nowadays. Chris operates as Chappell Customs out of Los Angeles, while Rob spins wrenches in Ontario, Canada, under the alias Origin8or.

This is Rob’s newest build, and we’re still trying to pick our jaws up off the floor.

“This build began three years ago,” Rob tells us, “right after I sold the white CB985 featured on Bike EXIF.”

“I figured I would spend the winter building the white bike’s replacement. Fast forward to the present: After six more client builds and a GSX-R1100 personal ride later, I finally got the CB finished.”

Rob wanted his new CB985 to stand apart from its predecessor—so he decided to finish it in black and play with its lines a bit.

Even though the donor bike’s fuel tank was in pristine condition he cut into it—reshaping it with knee indents and flush mounting a new pop-up cap.

Rob then customized a Kawasaki KZ1000 tailpiece to fit the Honda. (He’s made a mold of it, so that he can offer the unit to others via his website). Brother Chris also makes seats under the ‘Tuffside‘ label, so Rob commissioned a one-off perch for his CB.

It’s an absolute knockout—upholstered with suede, carbon and leather, and finished with yellow stitching.

Underneath is a superbly crafted subframe, with a triangulated single shock mount. It’s hooked up to a 2008 Yamaha R6 swingarm and shock.

Matching it up front is a 2008 Suzuki GSX-R750 front-end, capped off with a top triple clamp from Cognito Moto. Rob took care to clean up and brace the main frame where needed too.

The Honda’s rolling on new Carrozzeria V-Track forged wheels, with Dunlop GP-A rubber (120 at the front with a whopping 190 at the rear). Wave rotors at both ends, and braided hoses, add a smidgen more stopping power.

As mentioned, Rob tore the engine down and rebuilt it a little bigger. It’s now packing 985cc, helped along by a set of Keihin CR31 carbs and K&N filters. There’s also a new oil cooler, with braided lines and Earl’s fittings, and a stunning four-into-two exhaust from Cycle-X.

All the engine bits have been powder-coated gloss black, to compliment the matte black engine block. There are stainless fasteners throughout—and an anodized black billet sprocket cover from RICCI Engineering in Australia.

Rob ripped out the electrical system too—rewiring the entire bike with a car-style start switch, Dynatek ignition, new coils and an Antigravity lithium-ion battery. Everything’s been neatly tucked away, leaving the big four with a lean look (despite its brawny demeanor).

The CB985 is finished off with a long list of carefully selected parts. The clip-ons and foot controls are from Woodcraft; the latter are mated to adjustable Yamaha R6 rearset mounts.

There’s also an LED taillight with integrated turn signals, and a license plate bracket with illumination. With everything combined, the bike is totally street legal (there’s a Rizoma mirror too, but it didn’t make it into the photos).

Throughout the project, Rob wanted to walk the line between classic and contemporary. So finding the right color scheme was crucial.

“I played around with many different themes—solid black, black silver, solid silver—but they all made the bike look too new. I wanted to showcase the new parts, of course, but still wanted a retro feel that would highlight some of the bike’s heritage.”

The final scheme turned out to be a cocktail of black pearl, metallic silver, lemon sting, liquid copper and metallic red. Rob handled the paint himself—along with all the welding, fabrication and engine work involved.

And he’s completely nailed it: his CB985 is refined and crisp, but retains an air of brawniness and purpose. Now excuse us while we wipe the drool from our keyboards.