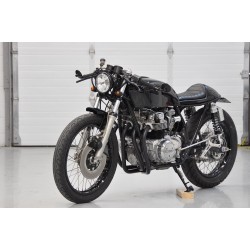 I'm not sure how it works, if all motorcycle people are inherently cool or I just manage to find the best customers? The owner of this CB550 had always dreamed of riding a motorcycle as a kid but mother knew best, later on it seemed that life and a marriage got in the way, but after several years on the road as a touring/working musician the marriage just didn't work out and it left a hole in his heart arching to be filled. So what's a man to do when he needs to move on and get past the heartache in his life? Seek the advice of friends? Seek out a therapist? Screw that, time to build the bike of your dreams!

The owner tracked me down through some mutual friends and after a few discussions about budget and style, and much back and fourth over 2up versus solo, we settled on the build style. Then the hunt was on for the donor bike, being his first bike and the fact that insurance on anything 650cc or higher is ridiculous here in Canada, the 550 seemed to suit his needs just right.

The donor for this build started out pretty much bone stock with the exception of a 4 into 1 exhaust system. It would only idle with the choke on fully and given any gas it just died. We wheeled it in and got to work.

The first thing was to play with the stance and see how it fit the future owner. I used a Tuffside cafe seat (thanks Bro!) cut off the rear end of the frame and threw on some clubman bars so we could get a feel for it.

The stance felt good so it was time to modify the frame. I started by bending a 1" hoop and tacking it on to get the position of the tail just right.

We decided the clubmans were a little on the high side and moved to clip-ons so we had to do away with the stock triple, just had to. Enter this beautiful billet unit from Bullit Custom Cycles.

Next up was the wiring. Since the bike was stock it was still running points and original coils. I swapped out all of that in favor of a new Power Arc ignition system and new solid state regulator/rectifier.

It got taken apart pretty quickly and before you knew it the engine was on the bench.

We opted to ditch the rusty stock rims since we wanted to run a wider 130 rear tire, swapping it out to a CB750 hoop. The spokes were cut out by the new owner and new stainless replacements were sourced from Dime City Cycles.

Attention was turned to the engine clean up and case polishing. Upon rebuilding the carbs and re-jetting I discovered that the previous owner had put all of the slides in backwards which is why the bike wouldn't rev. Fun stuff.

New powdercoated hoops and stainless spokes. Gloss black powdercoated frame and swingarm, new shocks, engine back in place and it's looking like a bike again.

I didn't like the way the new gauges sat so high over the top triple so I cut off the steering lock and fab'd a bracket to lower the gauges flush with the top triple.

All wired up and running on the small amount of gas we ran through the lines. Got the timing set up perfectly - time to button it all up.

The bike had brand new black paint on it when we got it so we left it at that. We had tossed around the idea of different colors but as the season was ending I didn't want to tie it up for another 2 weeks or so of prime riding time.

Do you remember your first motorcycle? There's something about the way it makes you feel and I don't believe that feeling ever changes, even when you're a 30 something first time bike owner and the bike is everything you dreamed of from the time you were a kid. I was extremely excited to finish this bike and hand it over to an owner I now proudly call my friend. There's no greater fulfillment than the smile on a new riders face after a first ride - yes, motorcycles are indeed the best therapy out there!

Full photoshoot in the gallery.